We Believe In Using

With Our Fellow Humans,

And Most Importantly With Our Beloved Pets. 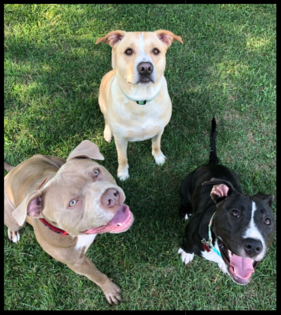 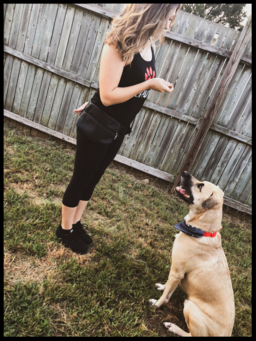 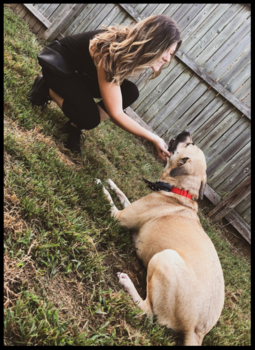 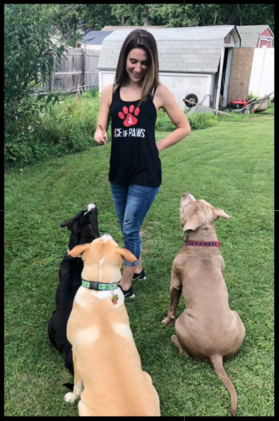 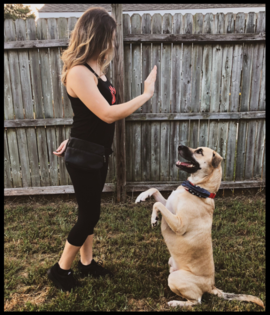 ​​As long as Ashley could remember she had a deep connection with all living beings. Growing up with a father who had the same care giving tendencies and fascination with animals, her home was constantly filled with a myriad of pets from boa constrictors to pet squirrels, from tortoises to cockatiels, and of course canines! Though each pet served as a companion, her truest connection was made with her two family dogs, Asia and Savannah. Asia, an exuberant but protective Rottweiler and Savannah, a wise and graceful German Sheppard would spark her love interest.
Ashley admired her father's keen skill for training their dogs nearly effortlessly and soon aspired to become a parent to her very own puppy. Ashley suffers from anxiety and desired a companion that could assist her in her times of need. Living in the middle of Georgia in May of 2016, Ashley soon adopted her first love, Milo. Milo is a patient, gentle, and sweet natured soul and proved to be the perfect fit for her. Knowing the importance of a positive reinforcement and obedience in order for Milo to best serve his purpose as Ashley's companion, Ashley's father taught her how to train Milo basic obedience. Ashley fell in love with the training process and watching her canine friend grow and learn.
Now living in New Jersey, Ashley watched as her younger sister adopted her first beloved canine, Taz. Taz is a high-spirited vivacious loving Sheppard, and her sister experienced the familiar process of falling in love and learning the most she could to give her fury friend the best life possible. After Taz was near a year old, he began showing a pattern of alarming tendencies such as growling at guests and lounging at other dogs. Ashley observed helplessly as her sister struggled with Taz and felt that she should help. Ashley had been truly blessed with Milo's amicable personality and positive upbringing, while Taz came from a situation of which her sister could not have helped or predicated, and now would patiently have to help Taz overcome these difficult traits.
Shortly after, Ashley found an ad on Facebook from a fellow co-worker, Aislynn Ross, looking for assistance for her business of dog training. Ashley's intentions were to assist Aislynn and learn from a highly valued mentor and pass her knowledge along to her sister, in hopes of helping Taz. Though Ashley's intentions were short term, Aislynn inspired her more than she could have predicted and awakened a dream Ashley never knew she had. She learned positive based training methods from AOP and with the cooperation and determination of her sister, helped Taz become the confident go-lucky pup we knew he could be!
Ashley has been an assistant trainer with Ace of Paws since January of 2017 and is working toward becoming a full time trainer with the company. Ashley, inspired by her mentor Aislynn, aspires to continue her education and hands on experience to continue to help families better understand and communicate with their canines. Knowing the value of kindness, Ashley delivers training and assistance through positive based methods, and will continue to study beside her mentors. Ashley and her boyfriend, Bryan, apply the same methods of training in their own home with their three beautiful Pitbull mixes, Milo, Achilles, and Aveda. 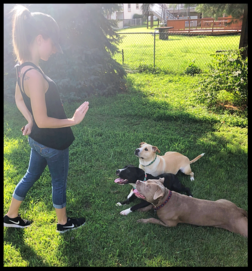 Kristina’s love of animals stems from her childhood. From day one she remembered being surrounded by all types of loving animals all thanks to her father. She grew up with her beloved furry companions and also some more unusual friends; rehabilitated squirrels, tortoises, exotic fish, bearded dragons, and much more! Kristina watched as her father loved and cared for each and every one of them, but she was especially fascinated by her father‘s relationship and connection to their family dog Savannah. The loyalty and trust they shared was unbreakable. He trained her effortlessly and their bond grew daily. Kristina had only hoped that she would be able to experience this level of companionship one day.
It wasn’t long after Kristina moved out of her home that she felt something missing in her life. She had always known she wanted a dog of her own but was never under the right circumstances, until one day she stumbled across a picture of a 10 week old hazel eyed German Shepherd that was up for adoption. It only took one look at Taz‘s face to know they were meant to be. Mr. Taz Toby Jr. quickly lived up to his name! He was sweet, loyal and had endless love to give, but due to his abusive upbringing that Kristina helped rescue him from, he experienced anxiety and aggression issues. The older he got the more these issues grew to be uncontrollable and became quite challenging for Kristina. Taz meant everything to her, and she refused to give up.
Kristina soon consulted with her sister Ashley, who had started working for Ace Of Paws and they quickly began working with Taz on beginner obedience training in hopes to help his confidence. Kristina watched as her once frightened pup became a more confident boy. It was in that moment Kristina realized exactly what she wanted to do with her career. She knew that if she could help a person in a situation like hers then it would make it all worth it. Kristina works towards this goal as an assistant trainer and dog walker by practicing positive based training methods alongside her mentor Aislynn. She hopes to be able to further her education and help as many families and their fur babies as possible.